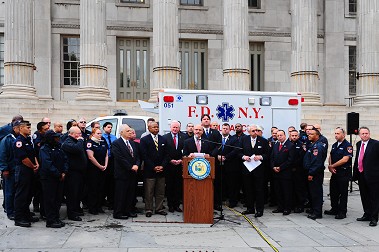 “We aren’t going to tolerate sending our heroes into harms way; we’re not going to let them be targets,” District Attorney Hynes said during the announcement on the steps of Brooklyn Borough Hall.

The Assaults Against Paramedics and EMTs initiative would assign these assault cases to an Assistant District Attorney in the Investigations Bureau who will review and prosecute the cases.

The group said they were calling for new legislation to increase penalties for these assaults.

“They should be prosecuted to the full extent of the law,” Commissioner Cassano said. “This behavior is inexcusable and will not be tolerated.”

Among those in attendance was FDNY Paramedic Betty Higdon, who was assaulted on the job. Although she was badly injured in the attack, it only was labeled a misdemeanor assault.

“I like to come to work to help people,” she said. “I just want the support to do this job safely – that’s why we must pass this bill.”