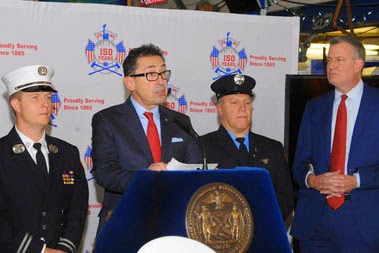 Mayor Bill de Blasio and Fire Commissioner Daniel A. Nigro announced on Dec. 16 that Fire Department personnel responded to a record number of emergency calls in 2014, which likely will exceed 1.6 million by Dec. 31 the highest total ever in the agency’s 149-year history.

“I’m proud to mark this impressive achievement,” Mayor de Blasio said during the press conference at Rescue 1 in Manhattan. “The professionalism of this Department makes all this possible. Whatever the call is, they are working to protect the people of New York.”

The previous record high was in 2012 when the agency responded to 1.575 million emergencies.

“Our firefighters, paramedics and EMTs members serve and protect the people of New York City every single day,” Fire Commissioner Daniel Nigro said. “They are willing to help anytime, anywhere.”

Fire Related Deaths Remain at Near Record Lows
As of Dec. 15, there have been 68 fire-related deaths in New York City â€“ one more than in 2013. (This includes the eight deaths that occurred at the East Harlem gas explosion.)

The overall trend for fire deaths remains the lowest in city history: During the last five years, fewer New Yorkers have died in fires than in any comparable five-year period since accurate record-keeping began in 1916.

Serious Fires
Serious fires are up slightly in 2014 â€“ about two percent - but are down more than four percent overall in comparison to the previous four year trend (2010-2013).

This continues the upward trend of steady increases in medical emergencies since the FDNY and NYC EMS merged in 1996. From 1996 to 2014, EMS responses have increased in 15 of 18 years, and have increased overall about 28 percent compared to 1996.

Community Outreach and Education
The continued trend of record low fire deaths is accomplished in large part by extensive educational efforts by the FDNY Fire Safety Education Unit (FSEU). Funded by the FDNY Foundation, this year the FSEU educated more than 600,000 New Yorkers at more than 7,000 Fire Safety presentations; in addition, FDNY members distributed more than 7,300 smoke alarms, 72,000 batteries and installed smoke alarms in the homes of seniors and homebound New Yorkers.

Through a partnership with NYC Service, FDNY also trained 13,000 New Yorkers to perform compressions-only CPR. In 2015, FDNY, NYC Service and the Department of Education will train 5,000 High School students citywide to perform this life-saving skill.
Posted by Avrumy B.