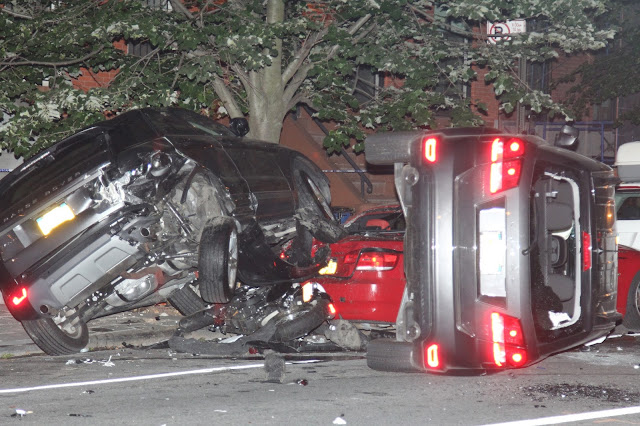 Brooklyn - An early morning vehicle smashup left four cars and a motorcycle mangled in the middle of a Ft. Greene street Sunday.

Officials said three people involved in the accident were rushed to Methodist Hospital; their conditions were not immediately known.

At least one witness blamed the wreckage on the driver of a gray Dodge SUV allegedly running a red light at Lafayette Avenue and Cumberland Street at around 2 a.m.

“I was going home; I was going down Lafayette, and the Dodge went through the light,” at Cumberland, said one man whose rental car was the first struck.

”It clipped the front of me,” said the man, who asked not to be named. The impact caused the SUV to careen into several other parked vehicles, overturning on its passenger side in the process.

A gray Range Rover wound up shoved into a tree with such force, it came to rest straddling atop a fire-red BMW. Below the Rover’s right back wheel was a badly crushed black motorcycle.

“It was a couple,” the rental car’s owner said of the overturned SUV’s occupants.

“They had to take the whole top of the car off” to get to the couple, he said.

“The driver was bleeding and obviously dazed. I helped get the driver out,” he said. “One of the neighbors grabbed a ladder and helped him climb out.”

Meanwhile, his own rental car had wound up spun around to face the wrong way on Cumberland Avenue. Its left turn signal continued to blink as he spoke to a reporter.

“We were asleep and the car was parked” on Cumberland Street, the BMW’s owner said after rushing to the scene.

“Cops woke us up and said our car was involved in an accident,” he said, looking dazed. 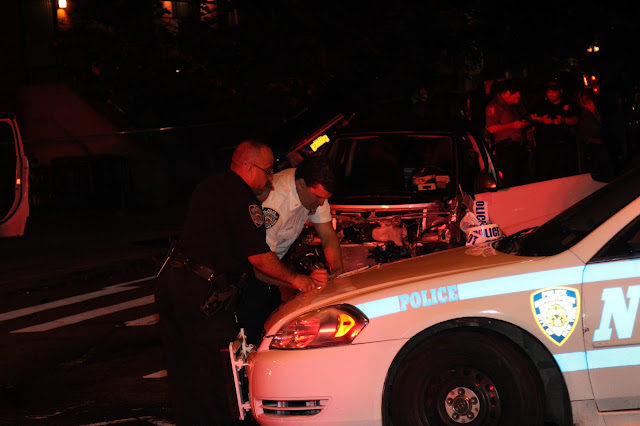 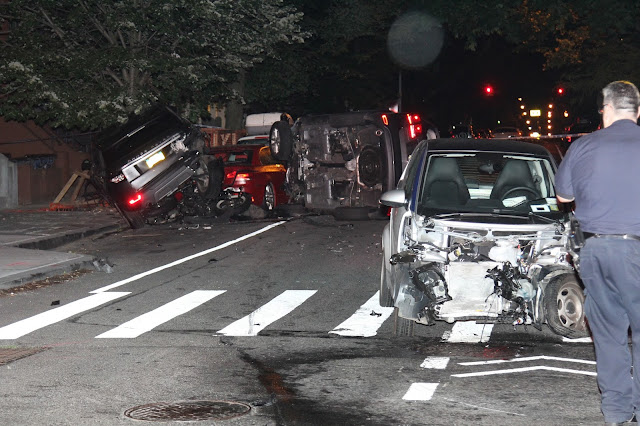 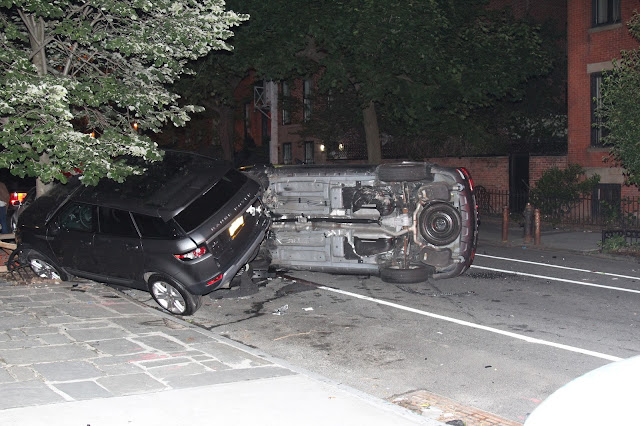 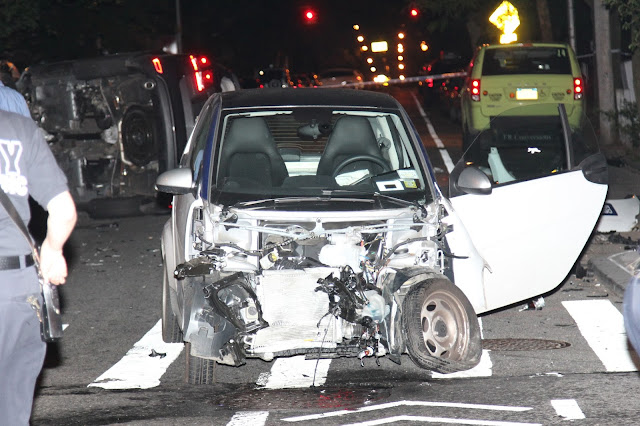 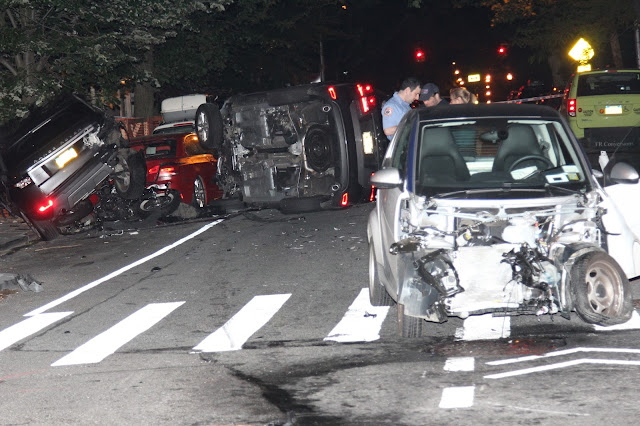 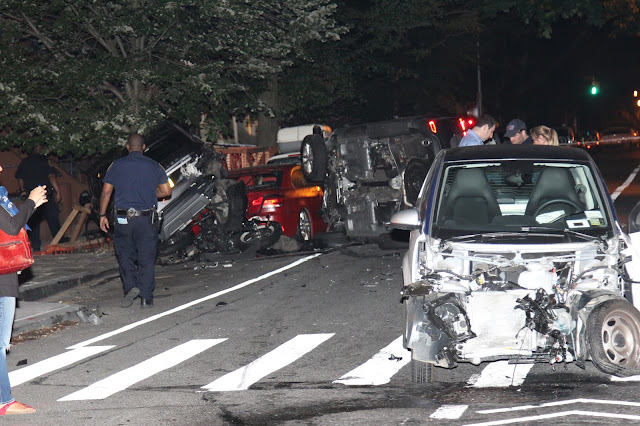 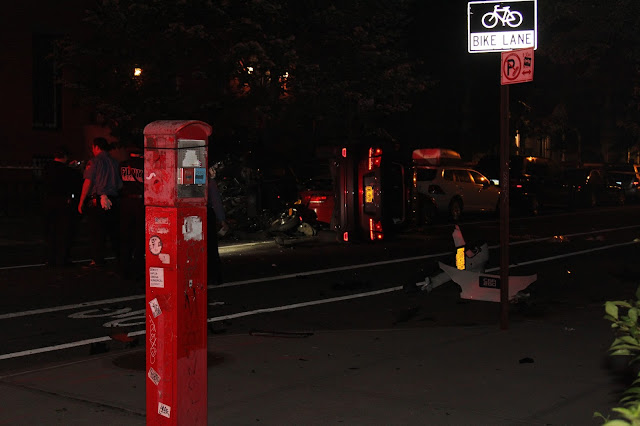 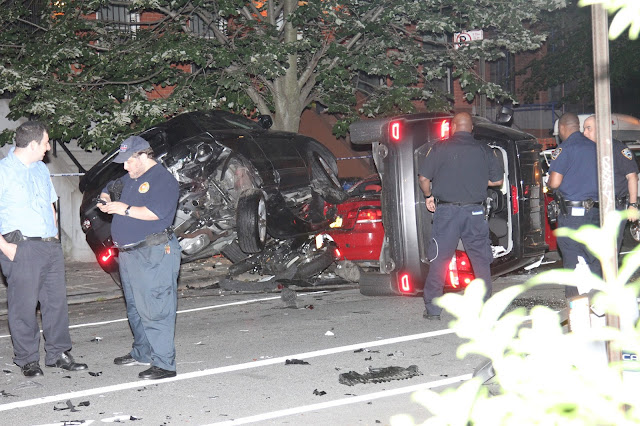 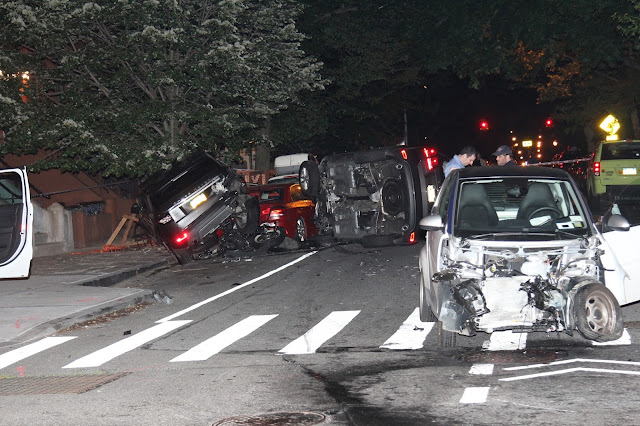 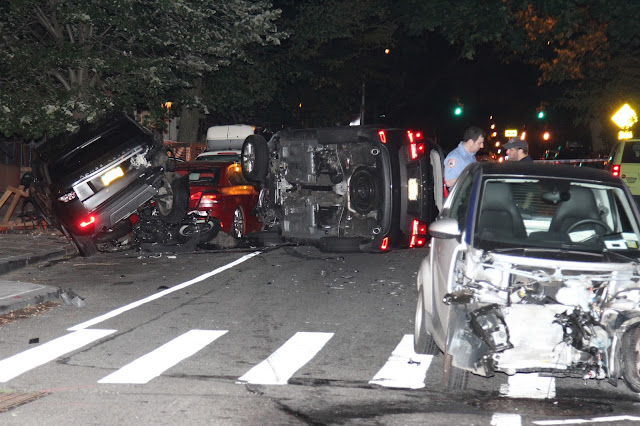 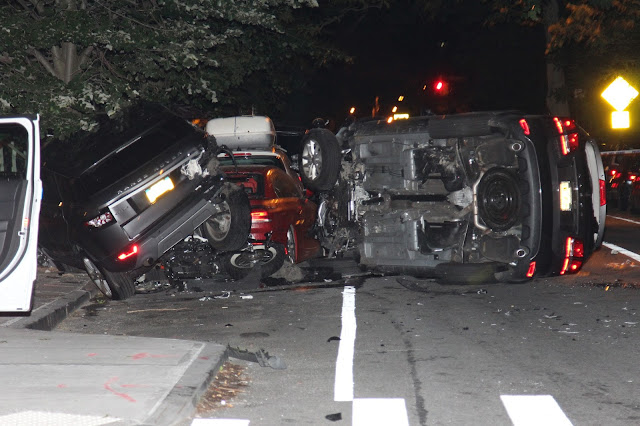 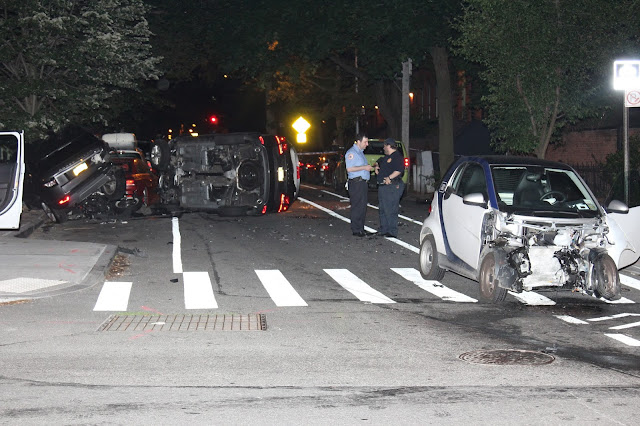 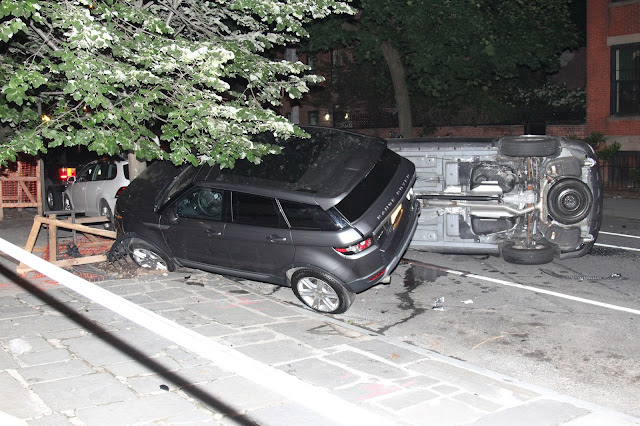 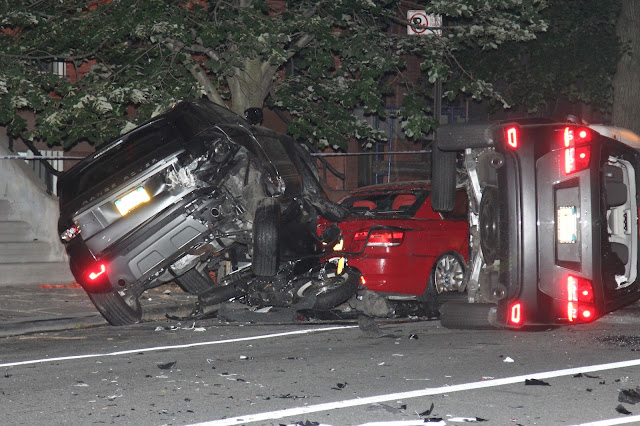 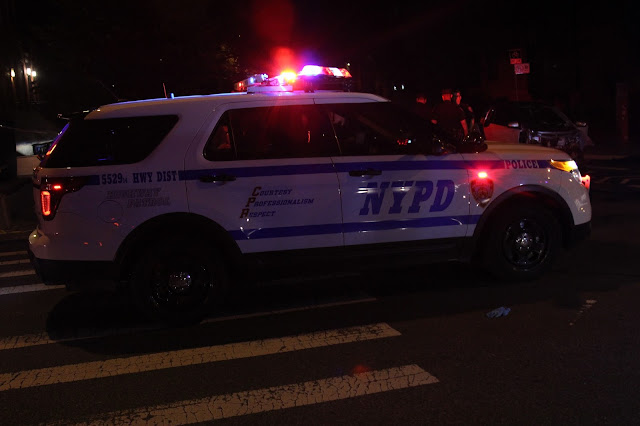 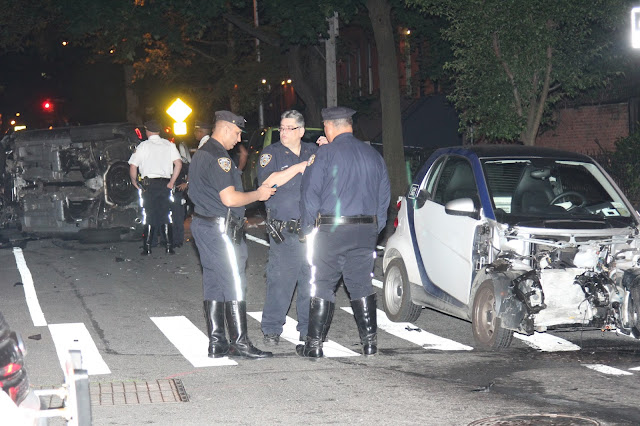 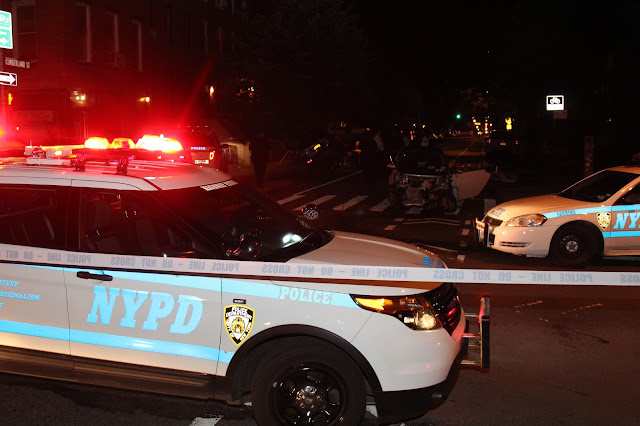 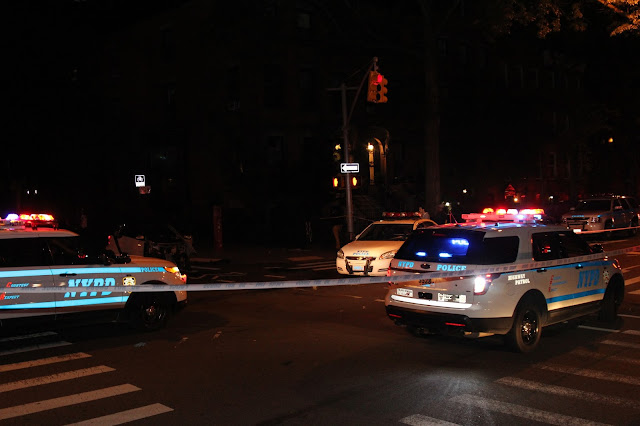 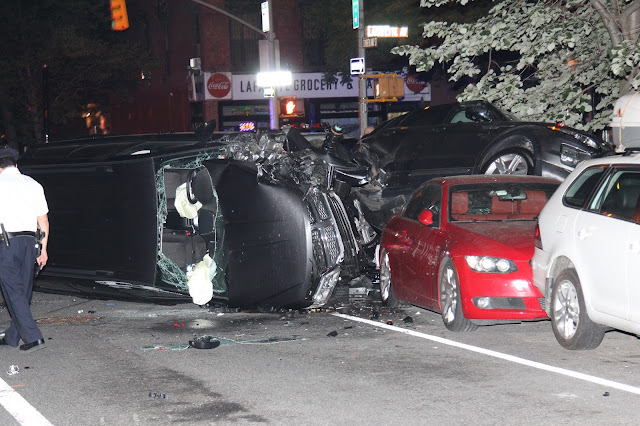 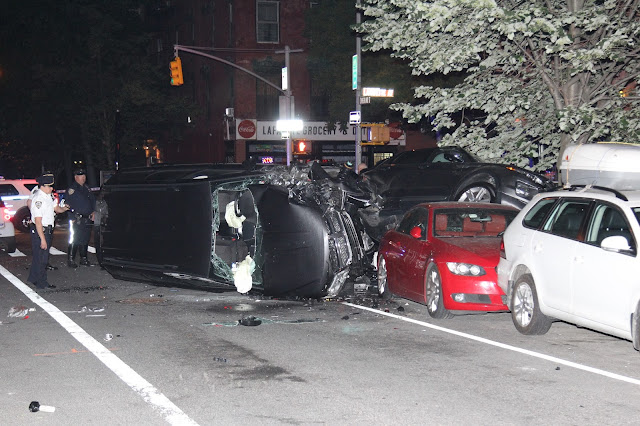