Woman On Scooter Killed By TT On Sixth Ave 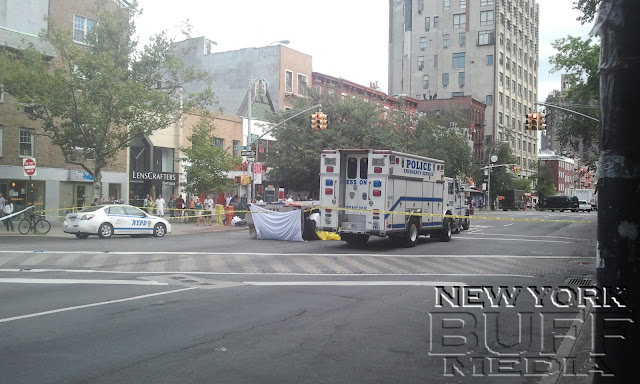 A 58-year-old woman on a small metal scooter was struck and killed by a tractor trailer on Sixth Avenue that dragged her under its wheels for two blocks Monday morning, officials said.

The woman was riding her scooter westbound across Sixth Avenue at West Houston Street when the massive vehicle made a right turn from Houston onto Sixth Avenue and plowed into her just before 9 a.m., the NYPD said.

The woman was caught in one of the rear tires of the massive truck and dragged for about two blocks.The driver of the truck, which belongs to Liedtka Trucking, was finally flagged down several blocks away at Minetta Lane, officials said.

Phil Liedtka, the owner of the Trenton, N.J., company, was not immediately available for comment.

"Many cars were honking to tell him to stop," Miguel Guerrero, the superintendent at 290 Sixth Ave. said of the driver.

"People were crying in Spanish and English and running into the middle of the street to stop [the truck]," said Lady Guerrero, who was with Miguel during the accident.

The victim, whose identity has not yet been released, was pronounced dead on scene.

The truck driver, who has not been identified, was not expected to be charged, police said.

Police sources said they believe the woman was hit by the truck's back wheels when it was halfway through completing the turn onto Sixth Avenue.

"The rear wheels cut much sharper to the curb than the front of the vehicle," a source said.