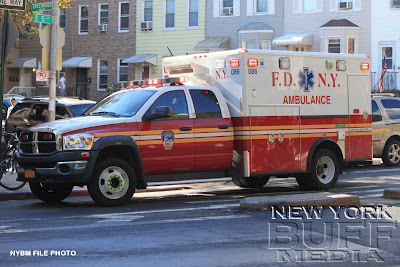 Greenpoint - A woman was struck by a tree during the windy approach of Hurricane Sandy Monday morning, an FDNY spokesman said.

The woman who’s reportedly in her 40s was struck just after 10 a.m. while in the backyard of 206 Freeman St., near McGuinness Boulevard, the FDNY said.

Officials were still on the scene tending to the woman, the spokesman said, and her condition is unknown.

This is the first confirmed injury related to Hurricane Sandy which began to ravage New York early Monday morning and is expected to make landfall by the evening.

Labels: Sandy
Email ThisBlogThis!Share to TwitterShare to FacebookShare to Pinterest