Names Of 15 NYPD Officers To Police Memorial In Battery Park 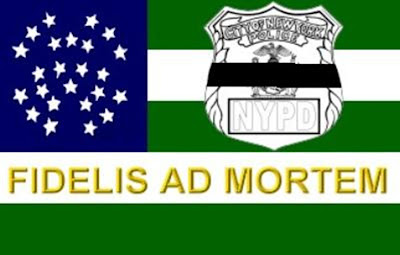 Detective Peter Figoski and Police Officer Alain Schaberger Were Killed Confronting Violent Criminals in 2011; Thirteen Others Died as a Result of Illness Contracted During Rescue and Recovery Efforts on September 11th

“For 15 years this wall has served as a powerful and lasting tribute to fallen members of the Finest,” said Mayor Bloomberg. “Today, we remember 15 who gave all: Two of our Finest who died in the line of duty in the past 12 months, and 13 who died as a result of illnesses related to rescue and recovery efforts at the World Trade Center and Fresh Kills.”

“This morning, we commemorate the lives of 15 officers who, in service to the people of this city, have earned their rightful place on this wall of heroes,” Commissioner Kelly said. “Memorials like this one preserve the contributions to public safety made by these outstanding officers, who patrolled our streets, subways and housing developments, driving down crime and making the city safer for millions of New Yorkers. To all of the family members here today, your loved ones will never be forgotten. They will be remembered forever in the hearts of their colleagues and friends, by the people of New York City, and by all who visit here.”

The names added to the memorial wall are:

Detective Peter Figoski, who joined the Department in 1988, in the midst of the crack epidemic and patrolled the 75th Precinct, where he helped to reduce crime in East New York by more than 70 percent over two decades;

Police Officer Alain Schaberger, a veteran of the United States Navy who joined the Police Department in July 2001 and was among the recruits mobilized from the Police Academy to help with police duties, traffic management and security at Ground Zero. He went on to patrol in the midtown south and 84th Precincts;

Thirteen men and women of different ranks and commands who united in a common mission to aid and protect the city in the aftermath of the September 11th attacks, searching, digging, and securing the perimeter at Ground Zero, and helping to identify victims at the Medical Examiner’s office and secure their personal effects from Fresh Kills:

Created in honor of those who lost their lives in the line of duty, the Police Memorial is located at Liberty Street and South End Avenue and was dedicated in October 1997. The granite wall with the names of officers and the dates they died are inscribed, a small fountain and the open pool are referred to as the “Sacred Precinct” by its architect Stuart Crawford.