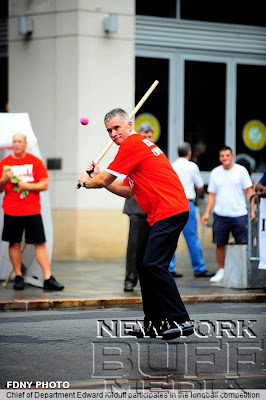 Brooklyn - A team of FDNY members swept a stickball competition versus an NYPD team on Aug. 14 outside FDNY Headquarters in Brooklyn.

They won the longball competition (with Lt. Joe Reznick making the winning 290-foot hit), the team competition and the game.

The event was sponsored by the New York Daily News and the Guardian Angels, with CEO Curtis Sliwa emceeing the event.